VDOT's "this is what we studied" I-395/BRAC meeting

In a last-minute decision (over an hour into it), I went to the meeting anyway. Good thing too, because there were a few juicy tidbits I'd have otherwise missed.

The meeting setup was VDOT standard fare, with various posterboards set up, VDOT and consultant personnel standing around to answer questions, and a formal presentation (which I was too late for). There were boards showing the overall site layout: 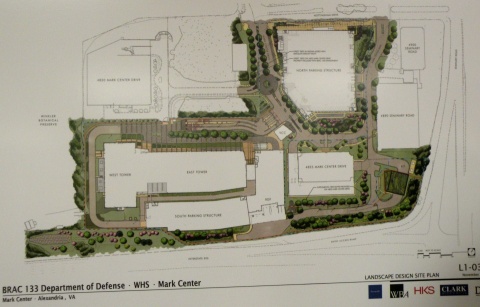 Another board showing the basic design and street improvements for Mark Center Road: 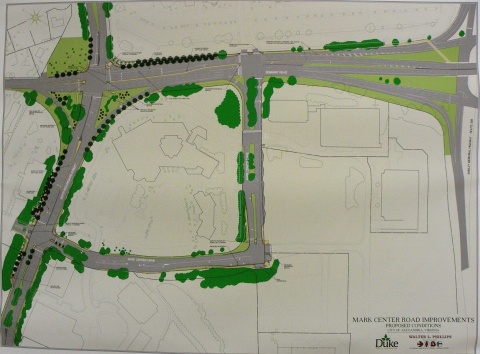 But the bulk of the meeting was focused on the two alternatives that VDOT studied in depth and brought forward, A1 and D. With boards showing how they (and the other official alternatives) ranked against each other on the purpose/need and guiding principles: 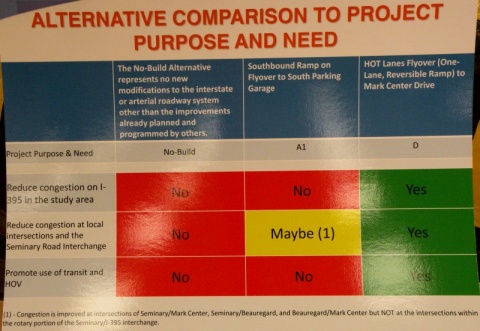 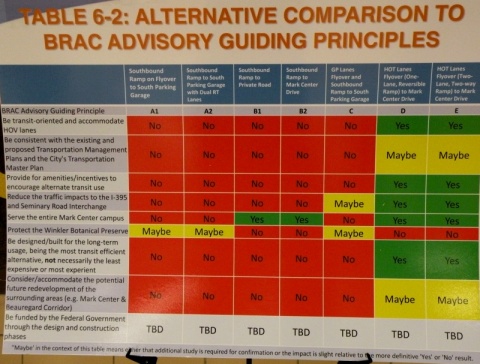 The Alternative layouts themselves are available online.


As you can see, Alt D is a clear "front-runner" amongst the alternatives that VDOT studied. Unfortunately for them, Alt D impacts the Winkler Preserve, and the city is very much opposed to ANY alternatives that would impact the preserve. As I learned at the meeting, even Fairfax County is now rescinding their support of Alt D, likely as a result of the tongue-lashing they received for attempting to convince the city to support that alternative.

So the county is looking (re-looking?) at alternatives for the HOV ramp that don't impact the Preserve, including bringing it into the south access road, directly into the South Parking Garage, or near the South Parking Garage with a bus ramp that loops around to the proposed Transit Center. They're doing this in part because they're very concerned about Mark Center traffic from the south (i.e. from Fairfax County) would otherwise be stuck going through the 395/Seminary Rd interchange, which is already horribly congested.

However, some of the other options are running into roadblocks themselves. The Army apparently isn't thrilled with the idea of the HOV ramp tying into the south access road. City staff are concerned about direct access into the South Parking Garage in no small part because that garage will have only 40% of the overall site parking. According to the county official I spoke with, the Army is at least willing to consider the option with a bus ramp that loops around to the transit center.

This is important because the design for the overall site is for a 40% mode split. Meaning that they're planning the area with the direct intention of having 40% of commuters using a mode other than driving themselves. An impressive attempt, especially when one considers the location isn't on a Metro line.

I spoke with a few people about the idea that promulgated from the March 1 BRAC Advisory Group meeting, with the HOV ramp flying over the interchange to connect directly with Seminary Road North (as I described in an earlier blog post. City staff are very interested in this design. The Fairfax County rep I spoke with expressed some interest. Unfortunately, response from the VDOT consultants was lukewarm at best.


The meeting was more than just discussion...there were a couple impressions that made themselves very evident. First and foremost, both the city and the majority of meeting attenders do not want the Winkler Preserve impacted in any way or fashion. They also want more than just immediate site access to Mark Center...they want a plan that addresses transportation in the general 395/Seminary Rd vicinity.

The final impression I got from the meeting is that VDOT (or at least their consultants) will not look at other alternative proposals unless city officils officially request them, or the proposal "has merit". While there's hope that they'll actually look at some of the other ideas out there or the city will call them out (the latter is a fair possibility), this impression did not leave me with a warm-and-fuzzy. The general impression I got is that VDOT considers this an Alternative D or bust situation.