What Andrews AFB bicycling could be...

My colleague over at WashCycle recently posted a writeup relating to BRAC transportation improvements and Andrews AFB. In a nutshell, Prince George's County will have a share of about $9.2 million from a recent appropriations bill for BRAC-related transportation improvements. While the county's BRAC Action Plan lists several highway and transit improvements, it basically has nothing for bikes and pedestrians (not counting a listed item to add pedestrian signals to the Perimeter Rd/Virginia Ave intersection on the south side of Andrews AFB).

This got me to thinking about what would work and what could potentially fit for bicycle facilities on Andrews. Here is what I came up with: 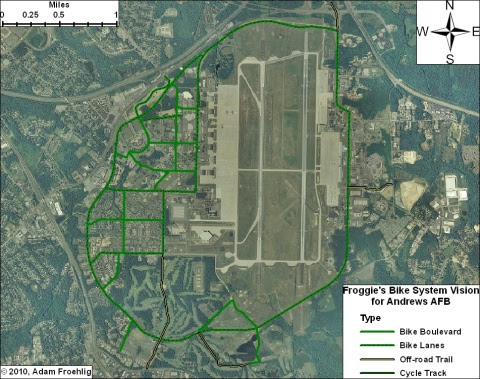 (Click on the image for a larger version. A PDF version is also available.)

DoD and the Air Force can easily begin encouraging a culture of bicycling on the base by implemeting several low-cost items, such as bike route signs, "Share the Road" signs, and sharrows. In addition, some of the roads on base are wide enough to be restriped to include bike lanes.

Such items could be implemented on the collector streets and minor arterial roads base-wide, providing a "bicycle boulevard" system that, though focused on the western part of the base, provides bicycle access to most facilities on the base.

Here are the more specific facilities in my Vision. Most of these facilities would require some street widening or new construction:

Not shown on my vision plan, but constructed a couple years ago, is a jogging path along the northern perimeter fence, from the old Maryland Dr gate (north of the water tower), clockwise around past the North Gate, to the old East Gate. This facility could also be utilized for a perimeter bicycle route, and could also be extended in both directions (on the western perimeter to Westover Dr and on the eastern perimeter to the Pearl Harbor Gate).

With or without the additional construction, this vision provides an integrated bicycle system on Andrews that connects to the surrounding community.
Posted by Froggie at 4:31 PM