I've been busy lately on Streets.MN, with two articles in the past two weeks:

Refining an Idea:  26th/28th Streets is where I took a look at a neighborhood proposal for calming and adding bicycle facilities along 26th St and 28th St in south Minneapolis.  I included *A LOT* of cross-sections created via Streetmix to illustrate various configurations. In short, converting both streets to two-way operation between Hennepin and Lyndale Ave, adding a buffered bike lane on 28th, and adding a two-way cycletrack on 26th, all look to be possible.  Whether the city follows through or not is another story.  More likely, what the city will do is add a single bike lane to each street.

Today, I took a look at the Franklin/Cedar/Minnehaha triangle area in the Seward neighborhood.  In
Posted by Froggie at 8:14 AM No comments: 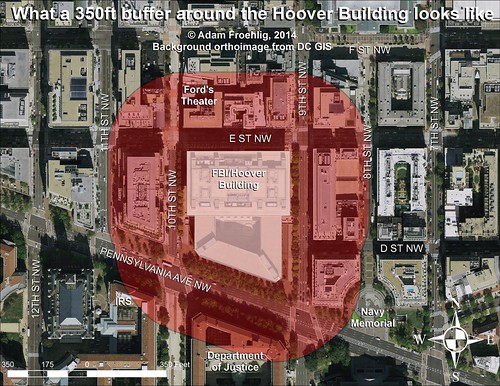 Greater Greater Washington ran a post a few days ago about the possibility of a second Rosslyn metro station for the Blue Line, as a potential precursor for a separate Blue Line across the Potomac into DC.  This led to a whole bunch of other ideas to improve Blue Line service (which has really been hit hard by the almost-open Silver Line) that would theoretically cost less.  Among the ideas pitched are to convert the Yellow Line into a "shuttle" between Huntington and King St or to reroute the Yellow Line to Rosslyn, in order to route more Blue Line trains across the Potomac on the existing Yellow Line bridge.

The thing that gets me with these is that there's actually more people getting on/off at Huntington than there are at Franconia-Springfield. While there's slightly more ridership on the Blue vs. the Yellow south of King St today (thanks to Van Dorn park-and-ride commuters), redevelopment plans at Huntington and Eisenhower vastly exceed anything at Franconia-Springfield and Van Dorn. So it won't be long (maybe 5-10 years) before the Yellow Line has more ridership south of King St than the Blue Line.

In short, a Yellow Line "shuttle" is not a realistic option. Nor is terminating a direct connection from Huntington into DC.
Posted by Froggie at 7:43 AM No comments:

This is what Arlington County, VA is doing for automated bicycle counters...similar to vehicle detectors that DOTs use for counting cars, except these are used for counting bicyclists and (in some cases) pedestrians.  A list of locations and equipment models is shown halfway down the webpage.

They're also about to unveil a real-time counter display that will display count information for passing bicyclists and pedestrians.

Perhaps other cities will pick up on this.  Looking specifically at you, Minneapolis…