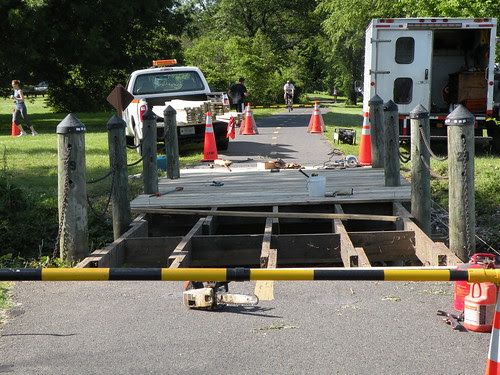 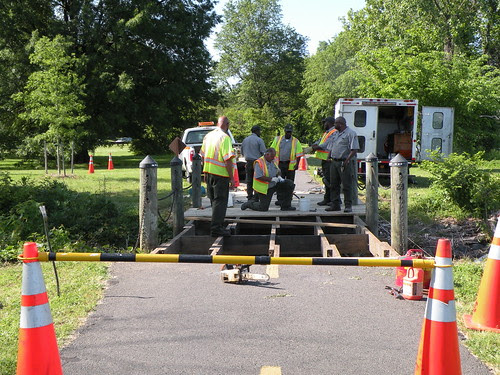 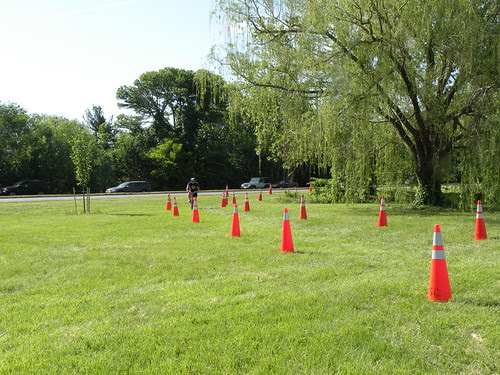 Curiously, the NPS worker also mentioned that NPS plans to replace all the MVT wooden bridges (not already done so) with heavier-duty bridges that can support emergency vehicles (a good idea since this one couldn't even handle a small forklift). A few such bridges have already been replaced down towards Mount Vernon, but the worker didn't know what sort of timeframe we can expect for the rest. What he did mention, though, is that the bridge over Dyke Marsh will be next.
Posted by Froggie at 4:21 PM

I wouldn't expect a wooden bridge to support a fork lift. Fork lifts are unbelievably heavy, they have to be so that they don't tip over when they lift a heavy load.

As a regular bike commuter on the MVT I commend the NPS for the quick repair. A couple of years ago I happened upon a serious bike crash just north of the Stone Bridge. EMTs were able to drive their vehicle to the victim. Once she was on board, the ambulance had to back up because of the flimsy wooden bridges. This took a good 10 minutes to do. News of bridge upgrades is very welcome news indeed.