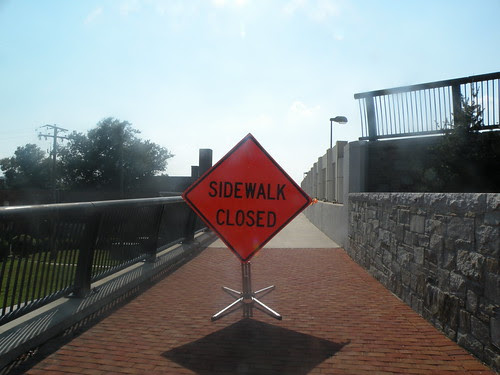 If VDOT really needed to shut down the path, so be it. But do it during mid-day, when you're affecting the fewest possible path users. They wouldn't close down a highway ramp during rush hour for normal maintenance...why close down a bike/ped path with no decent alternative?
Posted by Froggie at 7:51 PM

VDOT's lack of understanding of pedestrian and cyclist needs is a recurring theme in the DC area. The woefully inadequate, unpaved detour between the 14th Street and Humpback Bridges was one example. A second was under the Wilson Bridge at South Royal where the Mount Vernon Trail asphalt was torn up and replaced by...nothing. Somebody at VDOT needs to wake up.

You can't quite blame that first one on VDOT...Humpback Bridge project is well within NPS territory. The second one, I fully agree, but a bit of good news on that is apparently there will be a permanent bike/ped connection at South Royal instead of bikes having to loop east as was previously feared by some. More on that later.