Detailed map data offers tremendous potential to expand our understanding of the world in which we live. Unfortunately, most localities in the immediate area charge for this data, which should be publicly available to everyone.

Past posts on Greater Greater Washington and here on Just Down The Parkway have featured user-created maps based on GIS (Geographic Information Systems) data from DC and Alexandria.

DC's GIS data availability in particular has been described as "a treasure trove of interesting information." There are numerous data layers available to the public for free at the city's GIS Data Catalog.

But DC is the only jurisdiction in the region that offers so much data for free. The City of Alexandria and every county in the immediate DC area charge for the same type of GIS data. Some charge exorbitant rates.

I contacted each jurisdiction's GIS office in order to determine the price charged for three common map layers: building footprints, zoning, and elevation contours. The prices are shown in this chart: 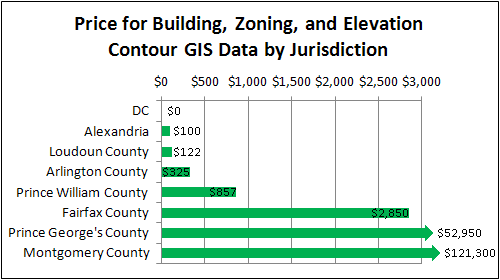 Alexandria and Loudoun charge a nominal price for CDs containing their full data set, which offers all of the GIS data they make available to the public. Arlington is similar but more expensive, as they separate their contour data from the rest and charge more for the contours. Prince William splits their land area up into several small geographic squares called "tiles," and then charges by tile instead of countywide. Fairfax provides countywide data, but charges a higher rate.

Even Fairfax is affordable compared to jurisdictions in Maryland, though. By comparison, both Montgomery and Prince George's charge excessive rates. They both charge "by tile," like Prince William, but with several hundred tiles within each county, the cost of full coverage skyrockets significantly.

There are some exceptions. Both Fairfax and Montgomery offer downloads of limited data for free. In Montgomery's case the free data comes as Google Earth "kml" files. However, the bulk of their GIS data, including the three layers mentioned above, comes at a price.

A number of free or low-cost GIS programs are available for the general public. As GIS becomes a more mainstream way to gather information, good data availability will become even more paramount. Making it available to the public at a nominal cost or free of charge is a good opportunity for jurisdictions to be more open with their residents, and to foster understanding and innovation.

It costs each jurisdiction virtually nothing to give the data to additional users. Some localities have argued in the past that they need to charge to recoup the cost of generating the data. However, that ignores the massive public good that comes from making it possible for people to create maps on their own, even if those maps will just get posted online somewhere and never earn anyone a dime.

Some area jurisdictions, DC in particular, have recognized this. It would behoove the other jurisdictions to follow suit.

Cross-posted on GreaterGreaterWashington.
Posted by Froggie at 7:28 AM