The Alexandria City Council is expected to vote tonight on whether to join Capital Bikeshare. The docket item is now online.

The initial round of 6 Bikeshare stations (with 54 bikes) is to be funded via already-approved FY 2012 CMAQ funding, with operating expenses to be covered from the city's pot of Transportation Management Plan (TMP) funds. No city general funds will be used, and the docket is quick to make that point clear. 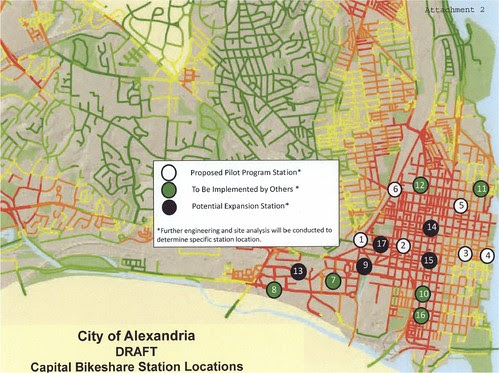 This graphic is from the City Council docket item for tonight's council meeting, showing the draft list of proposed stations. The white circles on the map are for the initial round of six bikeshare stations. Green circles are "To Be Implemenented By Others", likely developer-funded stations as there has been considerable interest among developers and property owners for including Bikeshare stations...as an example, the recently approved Harris Teeter development in North Old Town offered a Bikeshare stations as part of the new development. Black circles show future expansion locations. This is of note since Council approved FY 2013 CMAQ funding on September 27, including $400K for Bikeshare.

The street shading is from the city's map of Potential Bicycle Activity (page 6), from the city's Pedestrian and Bicycle Mobility Plan. It's basically their version of a "heat map" identifying potential areas of bicycle activity. It could also be used to identify potential locations for Bikeshare stations.

By comparison, here is my own idea on Bikeshare station placement, from June 2011: 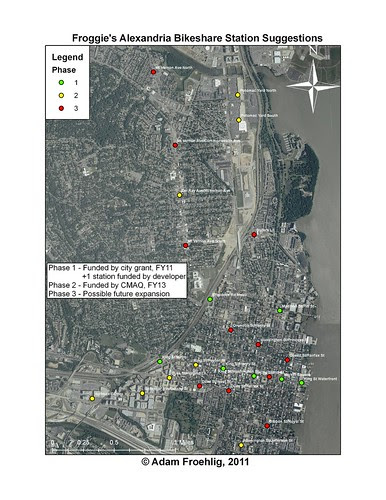 It's still too early to tell just how the City Council will vote on this. Two councilmembers are on record as in support, but indications are that the others are either lukewarm or disinterested. We'll find out tonight with the voting.
Posted by Froggie at 1:47 PM